Add a “Gas on arrival” feature to Celer cBridge.

Multi-chain season has kicked into full gear, and cBridge activity is now growing exponentially. However, one of the key frustrations for users is when they send funds to a destination chain, but have no gas on arrival to do anything with.

As a community member, I’ve been helping users out by lending them gas on destination chains in the #request-gas channel on the Discord server. Majority of the cases are users lacking ETH to use on Arbitrum to unwrap their WETH, which I’m sure the team is working on.

However, there are also many cases of users lacking AVAX on arrival to Avalanche, MATIC on Polygon, and so on. In the past week, Binance occasionally paused withdrawals of MATIC and FTM to their respective chains, which meant many users had no way of getting gas to those chains other than through faucets, asking friends, or through making expensive transactions on Ethereum.

A “Gas on arrival” feature for all destination chains would solve this issue, and create a big advantage for cBridge over its competitors in terms of user convenience. Example mockup: 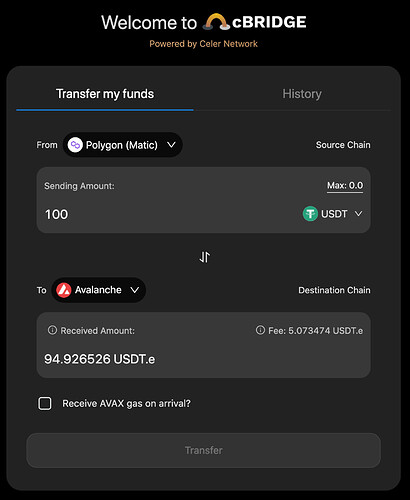 This proposal supercedes my previous proposal which requests support to transfer ETH.

I believe this implementation would be much more powerful, allowing users to travel to any destination chain without gas. Feasibility-wise, I understand it would involve needing a small amount of gas liquidity on each destination chain – e.g. AVAX on Avalanche, ETH on Arbitrum, etc.

An additional fee would be charged whenever a user requests gas.

What do you think?

While it only helps certain group of users - for those who need this, the feature is tremendously useful.

A small add on, it would be good if the interface could reflect the amount of gas (e.g., AVAX, ETH, BNB, FTM, MATIC, etc.) that the user will receive on his/her destination chain. It could be displayed immediately below the Fee item, or as part of the “i” pop-up …

Update: It seems Synapse have implemented this feature (but default rather than optional). On arriving at BSC, Polygon or Avalanche, users get a small amount of BNB, MATIC or AVAX respectively.

We need to get onto this! The UX difference is really notable, and Synapse is gaining traction.